If you’ve lost your star button used to make a bookmark in Firefox then here’s how to find it. 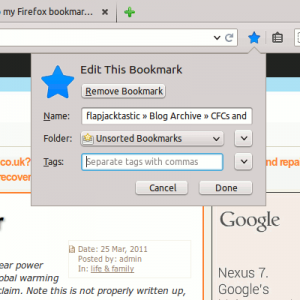 It really helps to know your keyboard shortcuts. F10 gets your menu bar back and you can pretty much work from there. Ctrl+D brings up the “bookmark this page” or “page bookmarked” [as it says now] dialogue … if you use that though you probably don’t need the rest of this blog post!

So my bookmark star, that used to reside at the right-hand side of the addressbar, went missing when I upgraded to Firefox 29 (on KDE 4.3, Ubuntu 13.10). A quick look on the toolbar customise menu (right-click on a non-active part of the toolbar) didn’t show the “star” for me to drag-drop in to position. A quick search around and I found posts for older versions of Firefox where folks had found the bookmark “star” button hidden away on a hidden toolbar. Right enough, when I activated the bookmarks toolbar (F10  > View > Toolbars > Bookmarks Toolbar) I found the “star” button. I don’t recall exactly how, but it showed up.

If you experienced the same problem, and particularly if this fix helped, then please comment and let this blog’s readers and I know (and I’ll make sure it’s reported in the Mozilla bug system). Thanks.

The same video but via Vimeo instead.

I had a similar issue, a wandering star button, with Windows XP when I came to test it. Resolved in the same way – it appeared in the left-pane when I chose “customize” from the right-click menu of the main toolbar.