Fact checking: Brexit Party turn their backs on the EU

Did the Brexit Party specifically copy the Nazis in the EU parliament as a means of protest? We can see that the image showing the NSDAP appears to be genuine and to show a protest that the Brexit Parties protest mirrors. 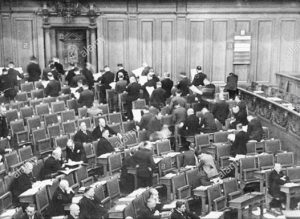 Brexit Party turn their backs — Just like the Nazis did?

An image today has been widely circulated. It comes via Alamy stock but appears to come to them from jW-Archiv (more on that later). The image shows the NSDAP, the Nazis, turning their backs in the Reichstag (the German interwar parliament) as a demonstration against other parties. This is being compared directly to news today that the UK’s Brexit Party members have, disgracing their country and the nobility of their positions, done the same in the EU parliament. 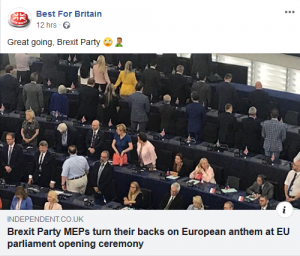 Corroboration: are they copying the Nazis?

Well, I can’t tell if they’re actually copying, but it seems too much of a similarity to be coincidence (more on that later, too). So, …

Where’s the original image from?

The Reichstag image purports to show the opening of the German parliament in September 1930. The images shared on Best for Britain, and by lots of others, including Christoper Oxford on Facebook, are watermarked as Alamy but whilst Google reverse image search finds the picture, the link returns an Alamy search page that doesn’t include this photo.

Searching Alamy for “1930 reichstag” (and similar) doesn’t return this image either; AFAICT from scanning through the ~140 results.

Alamy, according to Google are the only source for this image prior to 31 May 2019.

Tineye to the rescue!

Tineye, however have an earlier source, their earliest is 3 January 2010. The link is to JungeWelt.de (Young World; see Wikipedia), but is unfortunately broken.

OK, maybe Archive.org to the rescue!?

However, there is an Archive.org / TheWaybackMachine link for https://www.jungewelt.de/2009/12-08/018.php but that Archive.org page doesn’t show this image on it, and is in German (read via Google Translate). But sure enough, there is the image, linked with JavaScript, about half-way in to the article:

Which Google Translate renders as (with minor edits):

Nationalist Action
Already in Thüringen began a parliamentary Nazi terror: turn around when a representative of the bourgeois parties speaks (here in Berlin 1930)
Photo: jW-archive

jW-Archiv is the archives of Junge Welt themselves, presumably, and so it appears the image comes really from there.

Read the article with a subscription

If you have a subscription to JungeWelt.de or wish to buy one (20 Euro) then you can read the article that the image was found in and presumably confirm the details of the image.

Yes, the image does appear to come from a reputable source and has been referenced, since 2009 at least, as showing the “Nazi” members of the Reichstag turning their backs to the body of the Reichstag as a sign of contempt for that house and thus as a protest.

Was the link to the Nazis intended?

So, the last question to ask, politically is what did the Brexit Party mean by such a protest. As professional politicians it seems unlikely that none of those involved in organising the protest were unaware of the precedent, of when and who set it, which is gravely troubling.

To get a flavour of the backdrop in which this action occurred lets look at an article from Jewish Telegraphic Agency, which gives a report from Thuringen from 18 June 1930 (just before the September 1930 action at the opening of the Reichstag, original), quoted here in part:

During M. Goebbels’ speech [for which he was ousted from the chamber] he pointed to the Jewish deputy, Dr. Kurt Rosenfeld, and shouted “What does the Jew want here?” This utterance caused a storm of protest and the German chancellor, Dr. Wirth, arose and declared “nobody is entitled to insult a part of the German nation. I resent the statement that the Jews are traitors. The Jews have the same right of protection and liberty as all other citizens of the German Republic”.

This was during the establishment of NSDAP power, from Goebbels article on Wikipedia:

The rapid deterioration of the economy led to the resignation on 27 March 1930 of the coalition government that had been elected in 1928. A new cabinet was formed, and Paul von Hindenburg used his power as president to govern via emergency decrees.[90] He appointed Heinrich Brüning as chancellor.[91] Goebbels took charge of the NSDAP’s national campaign for Reichstag elections called for 14 September 1930. Campaigning was undertaken on a huge scale, with thousands of meetings and speeches held all over the country. Hitler’s speeches focused on blaming the country’s economic woes on the Weimar Republic, particularly its adherence to the terms of the Treaty of Versailles, which required war reparations that had proven devastating to the German economy. He proposed a new German society based on race and national unity. The resulting success took even Hitler and Goebbels by surprise: the party received 6.5 million votes nationwide and took 107 seats in the Reichstag, making it the second largest party in the country.[92]

So, NSDAP were blaming economic decline on a treaty [possibly correctly, if Keynes was right] established to create a peace in Europe, and using that as leverage with the people to start the reign of terror of the Nazis. Sounds to me like Farage, et al., knew exactly what they were doing in referencing the rise of the Nazi party (link shows events in 1930 from gaining their first parliament seat in January to becoming the second largest party by September).

Honestly I started this post thinking that the image might be fake, or irrelevant, but it seems — to me — like Brexit Party are directly associating themselves with Nazi Germany, which is the strangest thing given their supposed hatred of the rest of Europe, and yet, that position fits perfectly somehow.

If I was worried about Britain before then I don’t know what I am now; this is what I fear the history books will refer to as a “troubling development”.

Following the Nazi playbook we should expect the Brexit Party to come to power through coalition next, and to follow that up by taking key government positions that they can use to force social change (the Nazis filled the police with their own people and influenced education to sow racism and anti-semitism).

Ok, here comes the geek bit, there is code in the original article for showing the JPEG image (found by showing the source from the Archive.org page):

Which in short is basically this code:

A note on copyright: I’ve used the above images, one from jW-Archiv and another screen capture including Best for Britain content from Facebook (which in turn shows a story from The Independent newspaper) on the basis of reporting a news story and thus consider their use to be allowed use under UK’s Fair Dealing copyright terms. This story is CC-BY-NC.