Which free open source CMS is right for me …?

Moving from proprietary PHP website to a FOSS CMS

Note I only get as far as choosing 3 to look at more closely in this post. Next post coming soon!

You’ll know from reading here that I’m big into Free Open Source Software (FOSS) and have used several CMS systems. If you care to check some out then there are a ton of them (more even) on OpenSourceCMS and CMS Matrix to try.

I’m going to restrict myself to considering these few, for no particular reason:

Of course there are others like Typo3. Then down a maze of twisty passages we have Xaraya forked from an unpublished branch of PostNuke, PostNuke now called “Zikula” and originally forked from PHPNuke, etc., etc., but one has to stop somewhere!

What do I need, statement of requirements

One of the websites that I develop/manage is looking to move to a CMS system. The group, Diverse Manners, is an artists collective in South Wales. They want to be able to update the site themselves rather than passing content to me. That’s it, the entire NSR … they didn’t even specify WYSIWYG.

I basically did this site as a freebie only charging them for hosting – the idea was to change the style of the site for each new show. Problem is, as with all client-led work, you have to get the content before you can write the site. Worse still, in this case last bits of content came through about a week or so before the show but then I needed to find time and inspiration to re-style the site. This lead to some delays and the artists weren’t happy. Fair enough.

Back in about 2005 Joomla was forked off from Mambo when a commercialisation effort bit some of the devs in the ass (IIRC). Joomla is still, apparently, pretty close to Mambo but appears to have more of the OSS community behind it and seems to be a slightly neater and tidier implementation than Mambo. Strike off Mambo.

WordPress? Isn’t that a blog?

Yes WordPress (WP), and MovableType (MT), are really designed as blogging applications. That doesn’t mean they can’t be great CMSs though. Clearly, from its use here I’m familiar with WP so this could ease installation especially when it comes to modding and skinning – but WP is still primarily built around blogging and having looked into it I don’t think I want to hack around in the code, messing with the loop, to shoehorn WP into being a proper CMS (that’s a good starting link incidentally if you do want to try it). MT is a proper CMS now and one I’d like to try – I’ve only used it from a preinstalled version before.

No that heading doesn’t make sense.

TWiki (link to Wikipedia page) is here because I’ve done an install and ported content to a TWiki install within living memory. The “client” ended up cancelling – which may have been just as well. I got a long way into this one with an FCK Editor install to ease the editting process and avoid n00bs having to learn TWiki’s own version of Wiki Markup. TWiki has been forked as of Oct 2008 following a coup in which the founding editor appears to have sold out and whipped the whole thing out from community hands. It may be worth looking for NextWiki, or whatever it will be called, but I found that the coding was that complex I personally would have probably found it easier to hand-write PHP directly (TWiki is Perl coded) rather than trying to do things like “list pages in a section”, etc., YMMV.

So, no to the curve-ball.

XOOPS I did it again?

Ha ha ha, I wonder how many times that ones been tried and found wanting (the gag, not the software)! 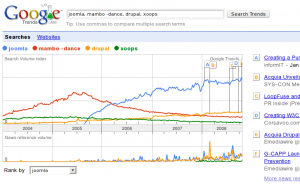 XOOPS and Drupal (and Joomla / Mambo) are what I consider to be the grandaddys of CMS systems. When I first learnt about such things in about 2000 I think these were all around. Looking at these popular CMSs through the lens of Google Trends we see Joomla winning out.

There are many comparisons including 2 or 3 of these three.

I think we’re down to 3, so I’m goign to look at their own sites as an indication of style and coding and assess them on first-looks along with widgets and validation.