Earth Hour is an initiative by the WWF to encourage people to “vote” for the Earth and against detrimental man-made climate change, particular that caused by overuse of fossil fuels. What time is Earth Hour in your time-zone?

Read about it. Tell your family, friends, acquaintances, colleagues, neighbours, petition your local council … and then join with everyone in turning off your lights on 28 March at half-past-eight. 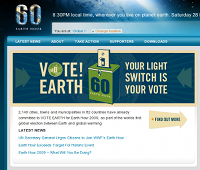 A little about Earth Hour from the WWF web pages:

More than 1,500 cities and towns in over 80 countries […] Landmarks from Nelson’s Column and the Wembley Arch in London, to the Millennium Stadium in Cardiff, the entire quayside in Newcastle and the Forth Bridge between Edinburgh and Fife are also committed to taking part.

“WWF’s Earth Hour is set to be the world’s biggest ever climate change event, and it will send an incredibly powerful message to global leaders that, in order to avoid its worst impacts, they need to take action to tackle climate change now,” said Colin Butfield, Head of Campaigns at WWF-UK. […]

WWF hopes that the millions of people taking part in Earth Hour will help to convince governments across the world that they must agree to take effective action to tackle climate change when they meet at the UN Climate Summit in Copenhagen, in December. 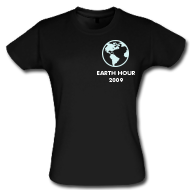 It may not be worth buying a new t-shirt just for Earth Hour so we recommend buying one anyway but wearing it at other times too ;0)

Thanks for promoting Earth Hour! Another way you can recruit people to the cause is by creating a Earth Hour group on Commit21.com. Simply create a group about one action that you will commit to do for Earth Hour and recruit your friends, family, and co-workers to get involved in that action as well. When it comes to climate change, simple actions can make huge differences and Commit21 leverages social media to influence networks of friends, family, and co-workers. Check it out at http://www.commit21.com

This is all crap. Are whole neihborhood can’t wait to turn on all of our lights and run our cars ! Wacko socialist enviromentalists can all go to hell!

“jack black” it’s “Our” not “Are.” Under most normal circumstances I do not resort to grammar correction. However, in this case I believe it indicates a lack of proper education. I do not intend to attack your character on this issue. It is a matter of you falsely accusing people who are looking forward to Earth Hour of being “wacko socialist enviromentalists.”

Taking just an hour to try to make a difference for the Earth is nothing to be ashamed of. I hope people will continue to take more than just an hour; not necessarily in complete electrical darkness, but in other acts of environmental awareness. This isn’t just our planet, this will be our children’s planet, their children’s planet, and so on. Let’s leave it as nice a place, if not better, for them as it has been for us.

I understand some people may be against the idea of Earth Hour, as it is apparent in “jack black’s” post. Nobody is being forced to observe Earth Hour, and I don’t expect everybody to have the same views on environmental protection. However, if people have something to say against the idea, I wish they would supply and support a logical argument rather than resorting to name calling.