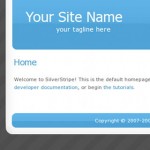 Of course you keep up to date backups so it goes without saying. But just in case you lose today’s data you should first backup your database and your web-root to. I simple downloaded the whole of my Silverstripe web-root to my local machine (using FTP with the Krusader application). Then I logged into my hosts admin pages and used phpMyAdmin to run a dump of my database (“Export” it’s called).

As I’m a belt-and-braces kinda guy I also used my hosts backup system (via Plesk Control Panel) to take a full domain backup whilst I was in a backing up sort of mood.

Next I purged the application cache deleting all the files in ./webroot/silverstripe-cache/.

Then following the advice on Silverstripe.org (along with tips from their forum and some other info on version 2.4.0) I removed the following folders:

Unpacked 2.4.1 and again using my FTP manager of choice (Krusader for it’s synch’ing and profile abilities) I uploaded the following

As it happened I hadn’t altered the default template files except for a couple of de minimis changes as this was a demo install, so I also replaced the ./themes folder; you probably won’t want to do that though.

In the web-root I copied across all the files except the favicon.ico and also made a point of keeping a php_flag from my original .htaccess which I had added post install.

Note that if you’ve followed these instructions then your assets and your mysite folders will be untouched in the upgrade process. Your site content resides in these files and so overwriting them would destroy any content you’ve created on your previous install.

to carry out database schema updates (see example output opposite) and you’re done. Check in with your blog and make sure it’s working as expected.

If you’re having problems then you’ll probably want to hit the forums and/or check the details for the specific changes in the release that you’ve installed (and any releases between the version you had before and the current one).

… and if that doesn’t work

This looked to have worked and then failed when I tried to enter admin mode. As I didn’t have much content in there I decided to flip-reverse things and instead uploaded the whole of the new version of the CMS, then added back in the content that I’d previously got. A pain, for sure, but probably more speedy than trying to discern exactly why the admin page was eternally “loading…” and a deal less frustrating I think.

Try turning PHP safe-mode off! That was the solution for me, just took rather a long time to work out that I needed too. But at last, solved, it works – behold simple CMS demo – yay!