Ever washed a spider down the sink, flushed one down the toilet .. you may have to rethink your spider killing – they’re back from the dead!

Spiders – Back from the dead 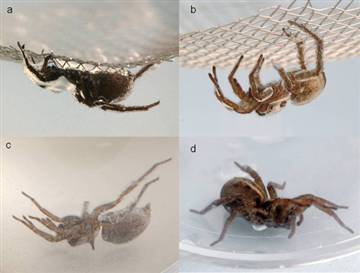 Marsh spider, Arctosa fulvolineata during an experiment. In the first image (a) the drowning begins, in (b) the spider becomes nonreactive (see the reduced air storage), in (c) the spider has entered a coma and in (d) it is recovered four hours after the end of submersion. [Images: Sonia Dourlot]

Scientists from the University of Rennes in France drowned 120 spiders in seawater to see how soon they’d die. When the the spiders stopped responding to being poked they were eventually removed for weighing. They took 24+ hours to die. They were left to dry, but then,  horror …

Spiders resurrected?! Run for the hills …

Shockingly some of the spiders survived being drowned!

Ever washed a spider down the toilet, down the sink plug hole .. if you’re an Arachnophobe you may want to rethink your means of getting rid of spiders. Washing them away just doesn’t seem to kill them.

I recommend splatting them, but the only real way to be sure is to nuke them from orbit.