Singer Pixie Lott has got me going again

Pixie Lott, music and images, song and album information, performance lists, video links – Pixie Lott has always had a strong passion for music and soulful singing and wants to bring it to those who share the same passion … 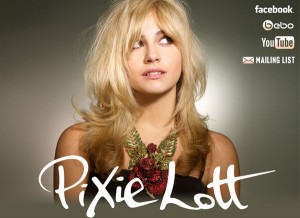 [L]isten to Hold Me in Your Arms, or the perfect, attitudinal radio pop of Turn It Up, or the wrestled-to-the-floor torch-song kiss-off that is Cry Me Out, and you think, nah, maybe not. Is she ready for the brickbats as well as the praise?

“I kind of take it all with a pinch of salt,” she says cheerfully. “Everything changes all the time in this business.” Pixie Lott, then.

A veteran already, at just 18. And coming to a post-awards red carpet near you soon. Keep your camera handy.
Dan Cairns, Entertainment writer, The Sunday Times, March 2009

Pixie’s music including her album, Mama Do, is out there to listen to find her on the web:

Pixie Lott has always had a strong passion for music and soulful singing and wants to bring it to those who share the same passion. At a young age she has always known what she wanted to become, and is overwhelmed by the opportunity she has been given. At 11 she gained a scholarship to the Italia Conti Academy of Theatre Arts to further her skills of singing, dancing and acting. She has had experience on the television for the BBC, and the West End stage. At 15 years of age in June 2006 she was signed by L.A Reid at Island Def Jam Music Group (Universal Music) in New York.
Mercury Music Group, 2009