Safari 4 on linux with WINE: solved

Fixes for the glitches when attempting to run Safari 4 beta over WINE on Linux; information based on WINE HQ post by E A Durbin. Note that I’ve added details beyond what’s there making this a full solution, read on.

Update, 2009-03-01: Dan Kegel has updated winetricks so it should now work without alteration.

All the following steps were performed and found to work for Kubuntu 8.10 on AMD64. I accept no responsibility if these steps hose your system, make backups! They provide a solution to running Safari 4 beta on WINE, it’s working for me anyway.

1. Firstly you need to copy the file at kegel.com called winetricks. It’s a shell script to enable easy installation and fixing of various problems with WINE. I can’t vouch for it but looking quickly through the code it seemed clean to me (I’m not a security expert). I saved winetricks as winetricks.sh in my home directory and then ran:

2. This installed the corefonts (by downloading the corefonts exe files and running them with WINE) but aborted on running the install_flash_player.exe due to a sha1sum error. This I attributed to winetricks not having been updated for hte latest flash player release (which was pretty recent). Quickly looking at winetricks I altered the following lines by adding a # before the expected sha1sums (lines 793-812):

4. Fortunately I’ve a MS WIndows XP install here and so I copied the iphlpapi.dll straight over from there, not wanting to trust the dll’s found on the internet, placing it in ~/.wine/drive_c/windows/system32/ .

Aside: The first hit for me on Google was DLL-files.com, their file may be fine but the size and sha1sum differed to my version, YMMV. [first, downloaded zip; second, downloaded extracted dll; third, copied from local WinXP]

Once you have the necessary DLL in place you need to run winecfg, choose the libraries tab and add “iphlpapi.dll” in the text field, the default setting of “Native then Builtin” appears to be right, Apply and Close the dialog. Wheesh, nearly done.

5. Now you need to open ~/.wine/drive_c/Program Files/Safari4/Safari.exe – I did this by opening the Safari 4 directory and clicking the Safari.exe binary application file. Hey presto! It works! 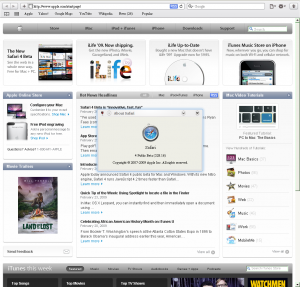 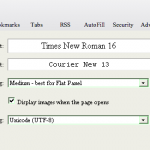 Last thing to do is to find the preferences dialog, via the little cog icon on the top-right of the toolbar, go to the Appearance tab and alter the anti-aliasing settings. They’re setup assuming (I think) that you’re using ClearType on XP, but you’re not. I found the recommended “Medium” setting to be best but it’s a close call between that and the “Strong” setting.

Lastly I also altered the Advanced settings to make the developers tools available.

That’s as much as I’ve tested for now.

First impressions of Safari 4 on Linux

Safari 4 beta over WINE is certainly good enough for my purposes of testing web designs against Safari’s version of the webkit rendering engine.

I was actually nicely surprised – running heavy flash sites like YouTube and BBC iPlayer is actually faster (in appearance at least)  than natively under Kubuntu (where flash tends to stutter for me). The web developer tools are as good as you’ll find in Firefox 3 plugins, with the addition of javascript profiling, but appear more integrated despite using separate windows for their displays.

Hope you have fun playing with your new browser!

20 Responses to "Safari 4 on linux with WINE: solved"

[…] Note my first impressions of Saf4 beta over WINE on Linux are now up. Bookmark this! Hide Sites Tags: apple, browser, linux, […]

[…] running Windows apps in Linux with Wine, or take a look at how to install Google Chrome in Ubuntu. Safari 4 on linux with WINE: solved […]

The main bug for this is http://bugs.winehq.org/show_bug.cgi?id=14574 – it appears work is in progress on it, so a lot of this won’t be as necessary soon, we can hope!

i can’t install it. i did follow every steps but when I clicked on Safari, it had a tab of Safari with the word “Starting …”. Then, I tried to click on it, it still didn’t work. After that, it appeared from my taskbar!!! I don’t know why at all! well, this is my first try with wine and I’m a newbie of ubuntu too ^^”

It would be great if you can answer me :D

[…] running Windows apps in Linux with Wine, or take a look at how to install Google Chrome in Ubuntu. Safari 4 on linux with WINE: solved […]

Sorry about the outdated Flash sha1sum.
I uploaded an updated winetricks yesterday or so,
the “modify winetricks” step should no longer be needed.

@Dan Kegel, thanks for that will amend accordingly
@ammii, probably best off to post at ubuntuforums.org and ask for an answer there. Make sure to say what version of Wine you’re using. I’m assuming it installed OK?

Oh… to see the tabs, fire up winecfg, go to the graphics tab, and uncheck the “allow window manager to decorate windows” option. Wine then handles the windows chrome, and hey presto, the tabs appear as expected.

On the downside, I’m finding that HTTPS doesn’t work, which is a real bummer.

thanks for that, I still don’t get the top tabs but it seems a little more robust this way

[…] See also posts on getting Safari 4 running on Linux and on fixing running with Safari 4 with WINE. […]

Would just like to add that typing iphlpapi.dll in winecfg wouldn’t work, iphlpapi (without the .dll) did however

Thanks Kevin, I think I tried both, certainly without the .dll works.

I was able to install safari but unable to browse secured sites like logging into Yahoo! Mail, Gmail, facebook, and other sites with https://…

[…] on from installing Safari 4 on Linux/Ubuntu here’s how to do things for Safari 5.1. If you have problems then check back there for steps, […]