Of course Apple haven’t really done the noble thing (yet) of releasing a Linux version despite the origins of webkit being firmly Linux based. But of course there are always ways .. here’s 2.

Once you’ve got it installed, you could do worse than heading over to Mac Rumours to test out some of Safari 4 beta’s whizz-bang moves. 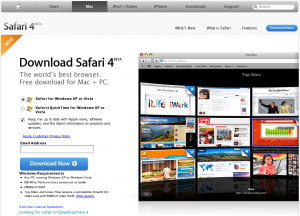 Getting Safari4 for linux

You can download the beta from Apple’s website. Despite appearances you don’t need to enter your email address to download, indeed you may be able to download Safari 4 on linux from this link (though it looks to have session info in it and maybe a UK mirror, YMMV).

Install on your Linux distro

1) Using virtualbox or another virtualisation solution

Loading up Virtualbox with a Windows XP guest on my Kubuntu 8.10 (Intrepid) host box – installing Safari 4 works perfectly. Virtualbox is available in the normal repos and for direct download from the virtualbox website for Ubuntu, OpenSUSE, Fedora, PCLinuxOS, RHEL, etc.. 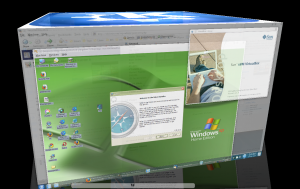 installing Safari 4 on Kubuntu in virtualbox

Once you have Virtualbox installed you’ll also want to install the Guest Additions software, with this you can make applications run seamlessly so that you can run Safari 4 as part of your linux desktop with no visual indications that you’re running it through a virtualisation environment. 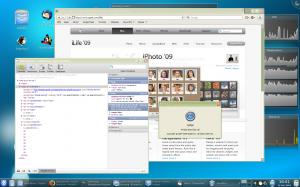 If you want to use the much hyped “inspect element” feature which has already been hailed as a Firefox killer by some then you’ll need to click the top right “cog” icon and tick in the advanced tab of the preferences to enable the “developer toolbar”. This enables the “inspect element” in the right-click menu. It does look awesome, but I’ve not had chance to fully test it.

Once you have WINE installed (eg from your distros repos) all you need to do is download the Safari 4 beta exe file (SafariSetup.exe) and double click it. WINE does the rest of the heavy lifting, follow the install prompts and away you go … Or at least that’s how it should be.

Currently all reports at WINE HQ show Safari4 to run like garbage. Nice.

There are some tricks to try from Safari 3, like ensuring you’re running WINE as Windows XP (via winecfg) and making sure truetype fonts are installed in WINE (copy them over).

Other ways to run Safari 4

Let me know what other ways there are to run Safari 4 on Linux (virtualised OSX doesn’t count!) …

I’ll post later about actually using Safari 4, but here’s one of the many thousands of early posts with first impressions of Safari 4 beta.

Update: Note my first impressions of Saf4 beta over WINE on Linux are now up.

Just an FYI, I’ve been using the “inspect element” function of Firefox since way way back in version 2. It’s in a plugin called “web developer”

for those who don’t know webkit’s inspector is available on a linux native browser: arora. this browser uses qt4-webkit so it is as fast as chrome or safari :)

Not only did I not know that but I’d never heard of arora .. cheers.

I was installed safari browser on my ubuntu 10.10 system with the help of wine software. when ever i opened that browser it’s doesn’t loads properly (ie doesn’t open default homepage it will be stay on loading ). How can i fix this problem in my safari browser. safari guys please help me.

I think that Linux is the best kept secret. I am testing Kubuntu and hoping installing Google Chrome will be easy. I wouldn’t bother with Safari if it wont install out of the box. I would use Google Chrome which is a suitable replacement for Safari. Wine is not an option. All applications working under wine perform slower for some reason.

I facing same problem as Ganixra, my browser is also not rendering any content, when I try to uninstall using wine uninstaller it is not getting uninstall and I can access the safari again Please help