Opera is about to change the world?!

Could an Opera browser based web-server on-your-desktop (!) be the new Facebook, Dropbox, Flickr, File server and data sync all rolled into one!? .. is Opera’s little browser about to change the [internet] world? 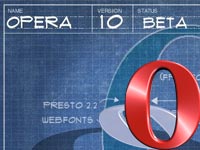 I read assertTrue()‘s blogpost predicting (on the basis of nothing it seems) that Opera will embed a web server in the next version, Opera X (ie Opera version 10) and thought .. yeah that could be cool.

Then I read Silicon Valley Insider on why MySpace is in far worse state than News Corp realised when they bought it. And then I grasped some of the potential of the paradigm shift that Opera may be about to swing …

Social networking without the central organisation. Serving MySpace or Facebook or Orkut like content from my own computer … no need to worry about losing control of your information, inability to backup, etc.. Probably the greatest first move here will be the ability to sync your browser, there’s no additional problem about relaying information (links, history) elsewhere – another computer, as authorised, can simply connect to your port 80 (assuming it’s open) and download the information. Simples!

Dropbox might be about to get a kick in crotch! The user controlled web-server could make it as easy as drag-and-drop to share files, but without having to use additional software.

Wow, I wrote most of this post then walked home for 20mins and these things struck me:

The upshot is that if a browser is serving content then there’s going to need to be some heavy caching, possibly simple mirroring, e.g. at an Opera web address that intercepts users if the browser is off-line (ie not serving web pages/content). Opera’s install base is important here too. Opera is on a lot of phones and used by Nintendo as their installed browser on the DS. Phones are usually on 24/7 … so no problems with being offline provided you’ve got free 24/7 access to the internet. Or …

Beyond the internet – double awesome

Although … a browser based server, using Opera, that is installed on devices with Wifi and Bluetooth connection doesn’t need the internet. This is not just WWW as we’re talking file sharing beyond web pages. This is not just internet as content could be accessed only over local nets (intranet) or via Bluetooth, say. “PeerNet” or “PeerWeb” seems a good description of this sort of distributed micro-server amalgamation of p2p and the web.

What do you think?

What possibilities does such a paradigm shift create?

Please add your comments. I think there is a whole lot here that we can probably not even imagine. Despite the potential security implications and some obvious roadblocks (ISPs blocking traffic) it’s got my inner-geek quite excited! Could Opera on-your-desktop (!) be the new Facebook, Dropbox, Flickr, File server and data sync all rolled into one?

5 Responses to "Opera is about to change the world?!"

Huh. This must be the most clueless of the clueless speculations so far.

An embedded webserver in a browser solves all these issues, just like that?

Wow. I bet it’ll solve starvation too and handle the swine flu pandemic while at it.

Opera already compresses and serves Web pages through its Opera Mini and Opera Turbo products. Now, what if it added all Opera users into that equation, making them basically a huge server farm? Any webpage an Opera user visited would be cached and served to other Opera users requesting that page. There would be lots of redundancy and you would be served by the nearest/fastest servers. It could be a swarming technology, with chunks coming from multiple servers simultaneously. This could potentially speed up the internet for Opera users, and the redundancy would mean the content could be served even if the original source for the content went offline temporarily.

@ Mr. Sceptic – and make you a cup of coffee too, don’t forget the donut! Not “just like that” but rolling those issues in (eg using extensions) is greatly simplified by this. Yes there are issues to address, like outbound traffic filtering, security issues, caching for off-line time, but I find it an exciting prospect.

@Jack – caching, even merging of CSS/JS and re-compression of images is hardly novel. If this is all Opera is going to do then I’ll be really pissed that they hired better marketing folk than product development folk.

amazingly I was right: http://unite.opera.com/

I came to this site originally looking for an explanation of the relationship between Alexa search rankings and nofollow links, then I noticed this post.

I keep Opera around to have an alternative to Firefox and Chrome. I really don’t see it being any more pervasive — particularly beyond it being an online browser — than it already is.