Eurovision win for Norway in Russia 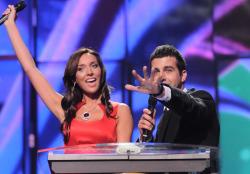 See the winning performer singing Fairytale in the video below, along with a performance of Always by AySel & Arash (from Azerbaijan), one of the other favourite songs …

Europe experienced a breath-taking show live from Moscow’s Olimpsky arena tonight with 25 acts chosen for the final from an original 42 countries. 20 of these had qualified from the Semi-Finals while host nation Russia and France, Germany, Spain and the United Kingdom were automatically included. After all 42 countries had voted, it was Alexander Rybak from Norway who was the lucky winner with his song Fairytale, collecting 387 points altogether.

Runners up in Eurovision 2009

Runners up were Iceland and Azerbaijan placed second and third – AySel & Arash from Azerbaijan took the most hits on Youtube with their song Always (below) for which Arash is also credited as a composer and lyricist.

Always possibly got so many viewings because AySel is hot, but it’s a very upbeat song and sounds like a winner!

Voting this year was 50% public and 50% by a jury in an attempt to combat the farcical nature of purely political voting in a song competition. For my money it doesn’t look like it quite worked but seems to have been better than previous years. We’ll see how things go down in Eurovision 2010 in Norway.

malta deserved a better place. i think most people don’t listen to the messages that real songs say. she had a wonderful voice and a beautiful song, much better than the winning song

Chiara “what if we” was the best voice and song we heard tonight. listners from england

“what if we” from Malta was the winner in our opinion

Thanks for posting Marian, Alex may not be the best singing but his was certainly a brilliant performance with a nice folk-music undercurrent and quite a haunting memorable melody ..

malta deserved a better place. i think most people don’t listen to the messages that real songs say. she had a wonderful voice and a beautiful song, much better than the winning song