On 17 and 19 May we visited London for work. Unfortunately we weren’t aware of the details of the London Congestion Charge scheme and have been issued with a Penalty Charge Notice (PCN).

What is the Congestion Charge 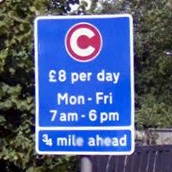 If you travel into central London (link to page with map of region) a charge is levied to basically encourage you not to use your own vehicle or to use a less polluting vehicle.

We were in central London from about noon on 17 May 2010. Left about 9pm. My wife, to whom the charge has been issued as registered owner of our car, was under the presumption that the charge was automatically levied by sending a notice to our home address (registered with the DVLA, the route they use to establish the owner and used to send out a PCN).

I assumed that one would have to pay online or by phone but thought there would be a reasonable period in which to make this payment – there was not.

No notice as to how to pay

There were no notices as to how to pay; nothing to nullify our assumptions. There were myriad signs informing us there was a charge, lots of them, one couldn’t miss them. Not a single one bore a phone number or website address: here are some of the signs along our route as they appear on Google’s Streetview as of 23 June 2010 – 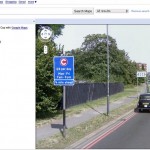 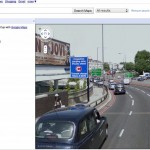 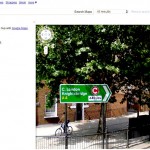 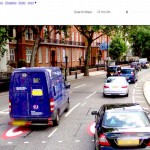 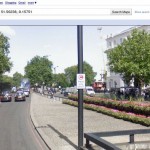 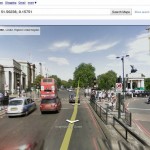 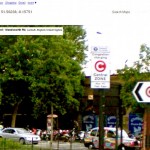 Attempting to pay the congestion charge

On the 18th having, returned to our home in Wales late on the 17th, we received a call requesting us to return to London on the 19th. I entered London again around noon (a little later) and again was leaving somewhere in the region of 8:30pm. I arrived at my sister’s where I was to stay the night and a little before midnight decided to surf the net a little to wind down (it had been a stressful and exciting day for me).

So I searched for “congestion charge” (or something like that) and came across the TfL website. I tried the online payment system but for some reason it wouldn’t let me pay for Monday (17 May 2010) as well as Wednesday (19 May) and so I rang up. After the usual precursors, we’ll record this, etc., I got on the line to Yvonne at the TfL call centre:

After a few expressions of incredulity from me I indicated that it was rather dishonest not to indicate that the payment period was so limited. Yvonne explained that I had received all the information in my pack when the scheme started – “I live in Wales, we never got a pack”. To this Yvonne’s response was that it was up to us to discover the charges and that we should have found them out before we travelled … this to me seems ludicrous.

I agreed to pay for Wednesday only, in order to appeal the issue of Monday’s ticket I was told I had to wait and get the PCN. There were no supervisors available to talk to me due to the time of night (supervisors knock-off at 10pm apparently).

As it happens TfL took payment for 2 days. We were only in London on two dates. So either they accepted payment for Monday and Wednesday or have over charged us, this may be a point for appeal but I’d rather address the overarching unfairness than get into nit-picky legalities.

Aside: TfL have also repeated that we should have used public transport – so fair enough they are actually encouraging use of public transport along the way, at least they’re getting that right. Sadly we couldn’t have taken the work equipment we needed by public transport. Indeed we were unaware of the machinations of the charge precisely because we’d previously used the train when travelling to London.

So we’ve issued an appeal. Or I should say my wife has based on the fact that they fail to issue us with a payment notice or to advise us as to how to pay. That appeal has just been rejected and we now have the option to have an adjudication from the Parking and Traffic Appeals Service (PATAS).

An analogy would be a toll road, it has “toll road” signs, lots of them but no payment booths and no information about how to pay. One makes enquiries and calls the owner of the road 2 days later only to be told you haven’t paid your toll and so they’re going to sue you unless you pay £120. Doesn’t that sound like extortion?

PATAS is a supposedly independent body (link to discussion of a particular appeal raising the issue of independence) that run tribunals/appeals to determine if TfL should cancel or nullify a PCN or other demand for money. I say supposedly as PATAS rely on charges from PCN and the likes for their funding.

Were TfL wrong, should we pay up and shut up?

We’re now considering appeal to PATAS – I suspect it will fail, demanding that details of how to pay be posted appears to lie outside of the ability of Her Majesties subjects.

There are various other general grounds for appeal, the Bill of Rights of 1689, whether TfL are acting ultra vires in various ways including by passing their court proceedings to Capita. But, these things don’t address the initial wrong: they didn’t give us a notice of payment due nor give us information about how to pay before issuing a fine for non-payment.

Or am I wrong?? Your views appreciated.

Several websites have forums dedicated to people who are either complaining or appealing decisions with respect to congestion charges (random examples, not chosen as good cases):

Googling around may also find articles about successful appeals: 1 2 but I’d take reports like this with a hefty pinch of salt.

hi i have just had the exact same experience ,i went to london from yorkshire for the first time .i saw all the signs but just presumed that a charge would be sent to me .but instead got the £60 fine notice .the traffic was horrendous and i had heard of the red route so i could not stop if i needed to buy a ticket or what ever you are supposed to do.i feel let down by my own country and london wont be getting a penny a my money again thanks .eric roberts

You are not wrong. This (central London congestion charge) must be the only example of a penalty being levied without the penalty givers providing you with the information required to pay the toll or a fair chance to do it.

i think its rubish that london can get away with this, there should def be signs saying you only have 24 hours to pay.

this seems like a money making scheme and nothing more.
i visited london as a tourist from cyprus and didnt know that there was only a 24 hour window to pay. wrote a letter of complaint and got a reply saying that they do not issue telephone numbers or websites on signs as it may distract the driver as the driver may try to write it down. great answer. this wasnt what i complained about, all i asked was for the sign to say you have only a 24 hour window to pay or face charges.

i paid the fine in the end as i didnt want it to grow higher than £60.
but am also appealing to this case to try get a refund later.

if this is not resolved and not refunded, i will use my powers in the media, as i am a writer in a national paper in cyprus called the cyprus weekly, to show my story and show how the london system will try anything to make money by tricking people, and first time tourists to the city.
and this will hopefully put people off for visiting london.
sorry but this is the only way to get heard is to hit them back in the pocket.