ingredients of “thepinkpatch” diet by applying a patch? 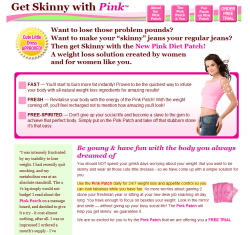 Well I was browsing digg as usual when I came across a link for “the pink patch“, curious fellow that I am I wondered what it was.

Turns out that the latest way to extract money from teen girls low self-esteem is to sell “diet patches”, think of them like nicotine patches but for people with (perceived or actual) weight problems. As much as I’m curious I was also sceptical, the only way to lose weight is to expend more energy than you put in as food – smaller portions, more exercise (must try this some time!). Can you really just stick a patch on and lose weight? I doubt it.

You can still have pasta, tea biscuits, fizzy drinks, pizza, and chicken nuggets if you want to. The Pink Patch controls your appetite so you don’t gorge. You’ll simply eat less! With the Pink Patch, you won’t be bored with salads!

Sounds like an ad for amphetamines, no? You’ll eat less and salad will be exciting?

Ingredients of a diet patch

What are the ingredients of the pink patch and what do they do?

The people at “the pink patch” kindly tell us what’s in their patches, amid the marketing guff, of course they can’t tell you the proper names for stuff – you might think it was a con … so here’s an analysis of what goes into their “proprietary formula”:

So there you go. A mixture of known “dieting” supplements along with a couple of stimulants and some antidepressants. The perfect thing for a growing girl. You could just have a meal of potato (starch makes glucose), avocado (vegetarian source of carnitine), mushroom (serotonin source), fish and egg followed by a Yerma Mate, Guarana, Bladderwrack and linseed tea – so perhaps an omelette and a cup of [rather unusual] tea. All you’re missing then is the little pink sticky patch so don’t forget to buy yourself a packet of sticking plasters too!

Is it any good. Well some of the ingredients will perhaps give you a bit more pep and stop you turning to food if you’re depressed. Others do genuinely help to “burn fat”. Whether any of these things can be delivered via a patch has to be seen. Moreover the idea that all you need do is apply a patch is probably self-defeating, even the tobacco replacement patches are sold with the warning that quitting smoking requires will power … quitting nicotine will too when you come to wean yourself off the patches … but that’s a rant for another time.

The weight loss will be healthy and gradual. Expect an average weight loss of 1-1.5 kg per week. To accelerate the benefits of the Pink Patch it is recommended to eat sensibly and follow an exercise program.

My advice: skip the patch and go straight for the healthy eating and exercise program.

2 Responses to "ingredients of “thepinkpatch” diet by applying a patch?"

Interesting article, adding it to my favourites!

Your writing style is quite a good role model for me – I have recently started my own blog and I am really struggling to write articles!