In the provocatively titled BBC series “Grow Your Own Drugs” James Wong  reveals that there is more to some fruit than just the nutritional value. He uses figs to relieve constipation, hops for a good night’s sleep, turns kiwis and papayas into a soothing face mask and uses goji berries in a chicken soup that could help relieve a cold. 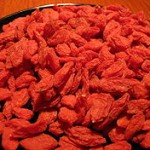 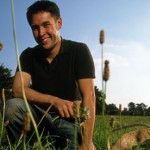 Many people think of plants as purely ornamental, something to brighten up back gardens and window boxes, but in this six-part series, ethnobotanist James Wong demonstrates how to transform familiar plants into simple natural remedies that could help ease the symptoms of minor everyday ailments, as well as how to make some pampering beauty treatments.

In this opening episode, James reveals that there is more to some fruit than just the nutritional value. He uses figs to relieve constipation, hops for a good night’s sleep, turns kiwis and papayas into a soothing face mask and uses goji berries in a soup that could help feed a cold – and all from things that might be found in any fruit bowl.

James tries out his remedies on members of the public, with some surprising results.
BBC Two, 8:30pm Monday 2nd March 2009 and on BBC iPlayer

For a simple goji berry soup …

Soak a handful of dried gogis berries in a bowl of water whilst you chop up your soup ingredients.

The hype machine calls them “fruit Viagra”, “cellulite-busting” and claims one pack will have you “jumping for joy”. […] the beta-carotene in the fruit is thought to help fight heart disease, defend against cancer and protect skin from sun-damage. The berries are a good source of B vitamins and anti-oxidants – which may help protect against the fallout from chemical reactions in the body. 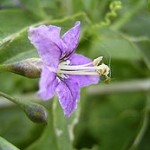 flower of the Lycium Barabarum that produces the Gogi berries

“It sounds like quite an amazing berry,” says dietician Jacqui Lowdon, of University Hospital, Cardiff […] “A serving of one berry is not going to turn your life around. That requires a combination of things: overall weight, attention to fat intake and types of fats, fibre intake, vitamins and hydration. It’s an overall package.”

You can buy Organic Goji Berries online from suppliers such as Sunfood Nutrition; founded by David Wolfe, they are a leading authority on the raw food philosophy that has swept through Hollywood and far beyond. David Wolfe is the author of Eating for Beauty

, and The Sunfood Diet Success System

, and is one of the most sought-after health and personal success speakers in the world today.