Details of my recent installation of a MFP from Epson on Kubuntu wirelessly. 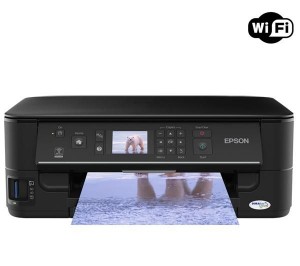 My last printer was an Epson. The one before that too. Indeed I’ve had a string of Epson printers going back possibly to the first dot matrix I used at primary school. I’ve been largely happy with my last one so Epson were certainly in the running when I was looking for an upgrade. But what clinched the deal? Linux drivers.

In the past CUPS, the every Linux distro’s choice of print system it seems, has taken quite a bit of finagling and finicking to get working. However this time I’ve been so pleased with how easy things worked I decided to blog about it. If you’re coming from a world where you use the market leaders software and everyone selling hardware already has drivers available via their install process then this may all sound a bit backward but here goes on the install process in all it’s [not so] gory detail.

Let’s take a step back. Before buying I checked various guides – best of them seemed to be TrustedReviews.com, expertreviews.co.uk and testfreaks.co.uk (probably in that order); along with sundry others like Amazon, Ebuyer. Then I shortlisted a few printers and checked out how others were finding them for Linux installs. OpenPrinting.org confirmed that this Epson model was working for others.

So I looked for the drivers on the Epson website and they actually have a category in their drop down list for “Linux” drivers. What’s more they have several different packaged versions available. So I downloaded all the AMD64 files (and the regular i386 ones in case I needed them on some other system later).

Actually bought the printer from Argos (UK) after reserving it online as they had an ink offer on giving me a free (£40 usual cost) set of CMYK cartridges whilst still having the printer at less than the Amazon price. The printer comes with a quickstart guide, manual, driver CD but no cables other than the power cable. There were 5 pieces of blue tape to remove – check the quickstart guide for where!

The Epson driver page has a English language install guide userg_revP_e.pdf (the “j” version is the Japanese one).

Here’s how it went down (all these files downloaded from the driver page):

It all worked. Well, iscan wouldn’t open directly but “AcquireImages” in KDE (on Kubuntu 12.04) worked fine using [it seems] the iscan drivers to connect and scan an image. Scanning was faster than my old CX6600 and there were higher resolutions offered.

Printing worked too. In addition printing from LibreOffice and from Firefox worked without issue where previously there had been a problem. Not sure if this is related to the drivers or what.

At this stage I wasn’t sure to be happy or not. I’d set aside a few hours to conquer the intricacies of an unsupported install with the added complexity of wireless communication and everything was working after about 30 minutes. But it wasn’t all over …

Picking up the right IP address

We have a bit of a joke in our household that whenever F comes in any computer tech will stop working. That’s almost what happened. The printer had picked up the next IP address from the router which was 192.168.1.3 but this was the one that a second computer usually takes. When that computer was put on that IP was taken, putting the printer on and the router then assigned it 192.168.1.4 … this caused a problem and CUPS went in to overdrive spamming me with messages that the new printer “may not be connected”.

So I checked on the router’s “Ethernet” tab and saw that the printer had been issued a new IP. “Ah-ha!” quoth I and set to work handing out some fixed IP addresses based on MAC address via the router interface. Now with the printer set to 192.168.1.10 things still weren’t working so I also went in the printer menu system and set it’s IP acquisition to manual and give it the same address. Still not working.

So I restarted the computer, restarted the printer, manually restarted CUPS, tried various permutations of DHCP/manual settings for acquiring the address. The printer was reporting the correct address. CUPS was finding the printer, it seemed, but jobs weren’t going through. Then I noticed that the dialog “Document Print Status” – accessed via the printers tray icon – there’s a menu item for Settings > Printer Configuration. 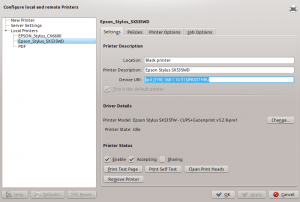 The “Printer Configuration — KDE Control Module” was reporting the same info as available via the localhost:631 CUPS interface but it appeared to have retained the original IP address of 192.168.1.3 instead of updating. So altering the setting to “lpd://192.168.1.10:515/PASSTHRU” and applying the change seemed to fix things.

One small gotcha but otherwise a smooth install, printer and scanner working well. Now off to report a potential KDE bug.

Where could you find iscan for Ubuntu 12.04? From the linked Epson page I can download the network (iscan-network-nt) plugin.
I found an iscan deb on the net, but that requires libltdl3 and Ubuntu 12.04 has libltdl7 …

Unfortunately Dropbox just ate the file when I was trying to copy it … oops!! I’ve got the i386 file still.