Effects of LSD25 on an artist

This post taken unashamedly from a series of 9 pages found at www.cowboybooks. com.au (no link). The copyright in images and text is not theirs and is believed to be Public Domain (by virtue of publication by the US government). The truth of the story behind this post is not yet established by me; please take it cautiously. Comments on a similar post have some insight to add.

Apply to artist and observe. 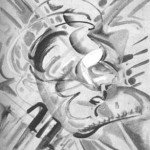 ‘Condition normal… no effect from the drug yet’. 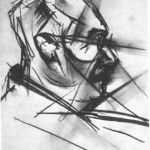 ‘I can see you clearly, so clearly. This… you… it’s all … I’m having a little trouble controlling this pencil. It seems to want to keep going.’ 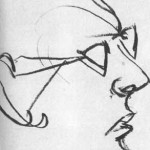 ‘Outlines seem normal, but very vivid – everything is changing colour. My hand must follow the bold sweep of the lines. I feel as if my consciousness is situated in the part of my body that’s now active – my hand, my elbow… my tongue.’ 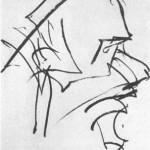 ‘I’m trying another drawing. The outlines of the model are normal, but now those of my drawing are not. The outline of my hand is going weird too. It’s not a very good drawing is it? I give up – I’ll try again…’ 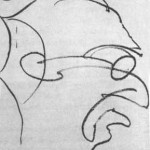 ‘I’ll do a drawing in one flourish… without stopping… one line, no break!’

‘I am… everything is… changed… they’re calling… your face… interwoven… who is…’ [Patient mumbles inaudibly to a tune (sounds like ‘Thanks for the memory’). He changes medium to Tempera.] 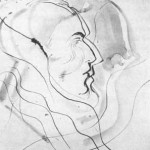 ‘This will be the best drawing, Like the first one, only better. If I’m not careful I’ll lose control of my movements, but I won’t, because I know. I know.’ 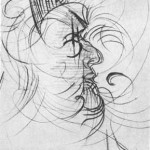 ‘I can feel my knees again, I think it’s starting to wear off. This is a pretty good drawing – this pencil is mighty hard to hold.’

‘I have nothing to say about this last drawing, it is bad and uninteresting, I want to go home now.’

Lifeslittlemysteries.com claims to have corroborating information on the images, though others express that they are fake. Quoting that site (with links added by me):

Though records of the identity of the principal researcher have been lost, it was probably a University of California-Irvine psychiatrist, Oscar Janiger. Janiger, known for his LSD research, died in 2001.

“I believe the pictures are from an experiment conducted by the psychiatrist Oscar Janiger starting in 1954 and continuing for seven years, during which time he gave LSD to over 100 professional artists and measured its effects on their artistic output and creative ability. Over 250 drawings and paintings were produced,” said Andrew Sewell, a physician at Yale School of Medicine who has done research on psychedelic drugs.

During the experiment, the artist reported how he felt the acid was affecting him as he drew each sketch. To add some modern understanding of how LSD affects the brain to the artist’s scrawlings, we reached out to Sewell and a few other psychologists for insight on what was probably going on in the artist’s head.

For more on this subject this article “ACID DREAMS, THE COMPLETE SOCIAL HISTORY OF LSD: THE CIA, THE SIXTIES, AND BEYOND” has some compelling information.