Test of various editors and IDEs for writing Python for beginners.

PR4E (Python) – Programming for everyone

I’m doing a Coursera course from the University of Michigan called Programming for Everyone (PR4E). Writing Python direct in to the web interface for exercise submissions is a bit clunky to say the least. So I’m curious what apps other beginners are using to actually write their python code?

Ignore this if you like, if you’re an absolute beginner it will probably seem like gobbledygook [ie nonsense]. I’m not new to writing computer code (or markup): I wrote my first code on a BBC Microcomputer. Since then I’ve used a lot of different editors and a few IDEs. Most recently I’ve settled with Netbeans for writing PHP/HTML+CSS and Kate for occasional small modifications; I also use nano from the console of my Linux desktop or when logging in to servers over SSH. I’ve used Subversion (SVN) a little in the past and use Git currently for version control.

What programs I’ve tried for code editing with Python

Just using nano (basic *nix editor) is fine but you can’t run the code right from the interface, there’s no code-completion or anything though there is syntax highlighting.

Syntax highlighting means that parts of the code are shown in different colours according to what they are, comments are shown in one colour, functions have another, reserved words another, etc..

Editors and IDEs I tried

Yesterday I spent the whole day searching for suggestions and trying to install and use different editors and IDEs (Integrated Development Environments). I favour Open Source software and/or free-gratis software … 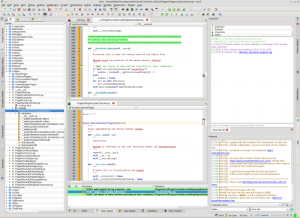 There are loads of editors, IDEs and such for python. I’m going to try using Eric for a bit. It’s a very personal choice however. I’ve used JEdit in the past and found that very good, don’t know how it is for Python in particular, if Eric doesn’t work out that’ll be my next try.

If you’re looking for still further suggestions then there’s a thread on stackoverflow that could help.

What are you using as a novice Pythonista?

I’m really interested to know what you’re using and how – whether you’re just using a basic editor or an IDE or what? Please comment so other reading can get a flavour of what available and what’s good.

As a postscript I wanted to mention that I’ve also used Gist (from GitHub) for saving my exercise entries up to now (good if you’re away from your main computer and doing some study). It would be very useful for sharing code and you can make the shared code private for sharing with tutors : theoretically others could find it but it’s unlikely.

Other people are using pastebin if the Facebook group comments are anything to go by, I’ve used that too, it does syntax highlighting and such as well and you don’t need an account.