Update on my posts on duplicati: fixed version for Google Drive won’t install on WinXP  but version 2.0.0.79 can be installed and works with OneDrive.

Duplicati is now updated to version 2.0-preview as linked from “latest” on their GitHub page. Meanwhile version 2.0.0.86 has been fixed to work with Google Drive where previously it was failing due to Google Docs (sic) updates.

On Microsoft Windows XP (!) I’m told I need to install Microsoft .NET Framework version 4, according to an error when attempting to run duplicati via Duplicati.GUI.TrayIcon.exe. The error is:

To run this application, you first must install one of the following versions of the .NET Framework: .NETFramework,Version=v4.5

Down the rabbit hole …

Answering “yes” will take you to a special .NET download page which appears to work properly. After install however the same error is displayed for me … but then we only got v4.0, the .NET site offers an upgrade to v4.0.3

Modifying the previous URL to request v4.5 – http://dotnetsocial.cloudapp.net/GetDotnet?rClrVer=v4.5 – takes us to blogs.msdn.com/[…]/dotnet45xp.aspx which tells us that v4.5 is not available for Windows XP but only for Vista and up:

So basically it didn’t work … so I had resigned myself to making zipfiles and uploading them manually, which would be fine for me. However “pbhj used GitHub and a solution magically appeared!”

A solution? Duplicati on XP works!

A GitHub issue offers a solution – install the following specific preview version and update in place [updating in place causes Duplicati to no longer work for me]. That version is available from updates.duplicati.com/preview/duplicati-2.0.0.79_preview_2015-01-19.zip. I had to allow the process to run in my BitDefender anti-virus.

On running it offers me an update:

and updating in place caused the application to fail to start. The update is slightly confusing, you first choose “install” (which downloads the update package), then “dismiss” the message. After dismissing you get a “restart” option. It is at this point that Duplicati fails to start again (perhaps because it now needs .NET Framework v4.5?) with the message:

Duplicati.GUI.TrayIcon.exe has encountered a problem and needs to close.  We are sorry for the inconvenience.

Finally a working version; but no Google

Removing the folder and re-extracting version 2.0.0.79 from the downloaded zip file restores Duplicati to working order, however the very latest fixes including the Google Drive updates will of course not be present. See changelog for details.

It’s worth noting that the new version works through a web browser connecting to http://127.0.0.1:8200/greeno/. Which is a little unusual and some users may not have seen this style of application before. 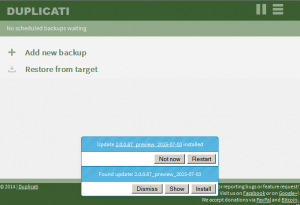 I’ve tested backing up using this on Windows XP to a Microsoft OneDrive account and both backup and restore of a password protected backup list (with several folders and a wildcard exclusion) works as expected. Yay!