Codestyle.org publish an annual fonts survey of web users computers to establish which fonts are available for use. The results make interesting reading, a must read for anyone working in web design. Font choice not only affects the style of your website, how it stands out from the crowd but also the readability. Familiar fonts aren’t always bad, they are often highly readable and may make visitors to a website feel more comfortable as if your site is a consistent part of a wider community of web sites – or on the flipside it just looks dull and boring. A fine line to walk.

Take part in the survey (via a Java Applet): Windows, Mac, Unix

Here are the top fonts by availability:

Most of these fonts are probably familiar to you and, if you’ve ever written a web page, have probably appeared in your font stack.

The ones you’re most likely not to have seen IMO are … (see after the fold for examples and download links for both payfor and free fonts). 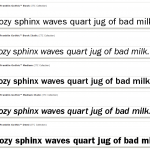 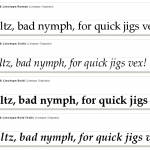 Monaco is an Apple Computers system font and is only available in Apple formats, not PC TTF, etc.. To get it you must purchase an Apple operating system (eg OSX).

Possibly the greatest thing Microsoft did for the web was to release a package (download site) of core fonts (Wikipedia link) available to anyone to download (yes even Linux users!). I’ve italicised the core fonts above. Nearly everyone has these or a form of them.

(this table from Wikipedia under terms of the GNU FDL) 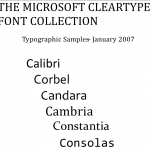 If you want to get hold of the MS Vista Cleartype fonts, eg for Microsoft Windows XP, then you might try this Google link (not sure how legal that is, make your own checks). You can get the fonts by buying either Microsoft Windows Vista Home Premium upgrade

or a Microsoft Office Standard 2007 Upgrade

– both of which will have these fonts integrated and you get the latest version for your Microsoft software too.

So, what about linux fonts? Amazingly they were included in the survey (woohoo – market penetration!) under Unix like operating systems (presumably Linux, Unix, BSD, etc.) for which the most popular fonts are those in the DejaVu (FOSS download) family, Bitstream’s Vera family (FOSS download) along with a selection from the URW foundry.

Linux is a vast and varied array of distributions (distrowatch list over 300). Fedora for example comes with a set called the “Liberation” fonts that are sized to be equivalent to the MS Core Fonts but are not an exact copy (as this would infringe the copyright on the MS fonts). The MS Core Fonts were found on over 50% of *nix computers in the Code Style survey.

Looking for a particular font, these are the repos that I use to find fonts: